skip to main | skip to sidebar

Kasupe Ministries Secondary School
Construction work of Kasupe Ministries Secondary School (KMSS) has continued and two buildings which were under construction have been completed. The buildings are a two-classroom block and a duplex. The duplex has two teachers’ houses and the teachers have already occupied the houses. The houses have separate kitchens, bathrooms and latrines. More buildings will be added this year depending on the funds that the ministry will manage to have. We hope that we will add another duplex, two classrooms, a library, laboratory, and pit latrines by the end of the year. At the moment, the school has about 90 students. The Form Two class will write its first exams this year. Kasupe has also just hired a new female teacher, Mercy Banda, to beef up the staff at the secondary school. This brings the total number of teachers for Kasupe Ministries Secondary School to four. Margie Berlin of Ashland Presbyterian church (Maryland, US) is also coming to do some ‘coaching’ to the teachers. She will be in Malawi early next month till October.

PEACE KINDERGARTEN
The kids’ school has about 100 children. Kasupe Kindergarten (also known as PEACE) has continued to help kids with education, food, clothes, spiritual programmes, and medical support. In the picture, two teachers, Ruth and Dorothy, pose with some of the kindergarten kids.
HIV/AIDS SUPPORT GROUP
The HIV/Aids pandemic continues to wreck havoc in Malawi just like in several countries in central Africa. KM is trying to change this trend. We reach to people with HIV/Aids messages in our area through a group of HIV/Aids positive people that Kasupe came up with. Kasupe Ministries’ HIV/Aids support group has grown to more than 50 people. The group is comprised of men and women (single and married) who have come out in the open to declare that they are HIV positive. Talking about HIV/Aids in the villages of Kasupe is no longer a taboo and we have seen a lot of results. Our aim is to help those who are suffering with the virus live longer and spread the message on the dangers of HIV/Aids to all (including the orphans).


“We are Positive and still going strong,” the Support Group Choir Testified in front of everybody

Food situation among orphans and households under the care of Kasupe
There will be no food shortage this year. Food production in Kasupe area has improved tremendously and there will be no food shortage for the first time in 15 years. The food increment in the Kasupe area has been greatly attributed to the Food for Work project that we carried out with the help of Osprey Foundation, Ashland Presbyterian Church, and other friends and partners. The extended Food for Work project was completed with the final food distribution done on March 31, 2009. The project was carried out from July 2008 to March 2009. Kasupe Ministries helped about 200 households that had been affected by the food shortage. We are delighted and pleased that the ministry, through your support, managed to save more lives with food. People were able to work in their gardens due to the food that was readily available for them. The recipients utilized the time to work on producing more food instead of looking for expensive food elsewhere.

The following activities will be done in 2009/10 to sustain the food production that has been made this year:
i. Extending seed and food bank storage building that was built by Kasupe in 2007; this will enable the ministry to continue its overall Food Security programs
ii. Procuring long-irrigation pipes and strong treadle pumps to improve irrigation in large fields
iii. Assisting farmers grow fruit trees for future household consumption and economic independence
iv. Helping beneficiaries build dams for water harvest program that will be used for irrigation; this program was started in 2006 and several dams have been constructed
v. Starting fish farming using the irrigation dams
vi. Assisting farmers grow drought-resistant crops such as cassava (yams)
vii. Helping farmers diversify food production by growing crops such as rice, sunflower, peas, and groundnuts
viii. Work out the logistics on having a Food Cooperative for farmers around Kasupe area

Other Programs Happening at Kasupe as of June 2009
Voluntary Counseling and Testing for HIV/Aids project, once every two weeks
Paying of school fees to more than 100 secondary school students
Paying of college fees for five orphans; the students are studying at Salima technical college
Extending the area of operation of the ministry due to the appeal that has been made by some villages, the number of orphans under the care of Kasupe Ministries may increase to about 1200
Preparations for food security program

You are invited to visit Kasupe Ministries in Malawi

Kasupe Ministries would like to extend an invitation to all friends from all over the world who may be interested to visit Kasupe villages next summer for long or short term mission work. You do not need any prior skills to come and assist. There are so many opportunities for you to serve such as teaching at Kasupe Secondary school or the Kindergarten, assisting in feeding children, leading Bible studies, teaching or preaching in local churches, helping in construction work of Kasupe Ministries Secondary School, working with the HIV/Aids support group, as well as organizing sporting activities with kids (both young and older kids). You can also initiate your own project that can benefit the people in the villages. While in Malawi, Kasupe Ministries will be responsible for your village accommodation, food, transport as well as recreation.
Visiting Malawi will also give you a chance to go to the Lake Malawi for a “swim of your life” as well as visit the parks where you could see different animals such as elephants, hippos, crocodiles, buffaloes, antelopes, waterbucks and many more.

In the above picture, you can see some of the girls from California who came to Kasupe in 2008.


Belgium visitors with Kasupe workers, 2008 (left); Guust, Jeroen and two others from Belgium braced the sun to help feed the children during their visit (right)


Others were saved and were baptized according to what Jesus commanded, we were there to witness this good news-in the picture, a girl from California is baptized by Pastor Godfrey Kadzuwa in a dam closer to Kasupe Ministries’ center (left); Some visited the poor and helped them in many ways (right) 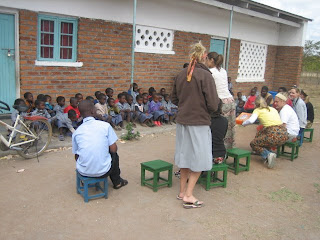 Posted by Kasupe Ministries at 5:20 AM No comments: 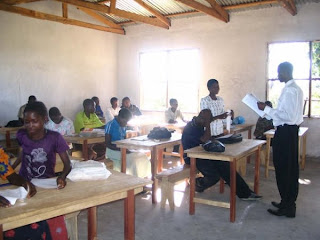 Posted by Kasupe Ministries at 5:19 AM No comments:

A YEAR FOR BLESSINGS!
“A Year of Blessings”, said Christopher Tambwali, a form II student being supported by Kasupe Ministries. He was right, many of the children have shared the same view for 2006. We are thankfull to the Lord who provided for us inorder to assist the kids as well as reach out to the caretakers in malvelous ways. He has done great things to us during the year. This annual report has briefly presented what was accomplished in the villages under KM care. May His name be glorified.

I. Kindergarten
a. 62 kids attended classes for the whole year
b. School had three full-time teachers
c. Tables and small chairs were made for all kids
d. Uniforms were bought for all kids
e. More playing materials were provided by overseas visitors
f. School pitlatrine was completed
g. Meals were provided every school day to all kindergarten kids

II. Education
a. Morethan 60 secondary school students were supported with school fees
b. Drop out rate of girls was slightly reduced
c. Girl students were encouraged to attend school and to work hard
d. Profiles for students were developed
e. Five students had individual sponsors
f. School materials given to all primary and secondary school students
III. Food Security
a. About 50% of Kasupe Ministries’ beneficiaries had produced enough food for the whole year, more compared to last year
b. 1450 bags of maize were bought to completely cut the hunger circle
c. Maize was bought to enable all beneficiaries work in their own fields
d. Food distribution started in October 2006 and will run until March 2007
e. Kasupe bought and opened its own maize garden
f. Two treadle pumps acquired for irrigation during dry seasons
g. Kasupe managed a demonstration maize plot for dry season farming
h. Food security programs largely supported by Osprey Foundation of US

IV. Bible Camps
a. 4 Bible camps were conducted, three of them supported by overseas visitors
b. Word of God taught to children during the camps
c. Camps were open to all children from 10 villages
d. Average attendance was 700 kids for each camp

V. Kids Days
a. 6 kids days conducted, three of them supported by overseas visitors
b. Activities open to all kids from the 10 villages supported by Kasupe Ministries
c. Average attendance was 800 kids for each Kids Day


VIII. Bible Studies/Prayers
a. Bible studies done every Wednesday
b. Prayers dones once every week
c. Morning chapel service started for all full-time staff (once every week)

X. Clothes
a. All orphans supported with one pair of clothes
b. More than 250 orphans received assorted materials such as shoes, blankets, bathing towels


XII. Financial Report
Report can be sent upon request

We would like extend our sincere thanks to many friends around the world who are tirelessly supporting us through prayer and generous material & financial donations. May the good Lord continue to bless and watch over you.
Posted by Kasupe Ministries at 6:20 PM No comments:

In 2008, Kasupe Ministries was able to accomplish a lot because of generous friends and partners who joined hands to help the children in Malawi. We have fed hundreds of children and needy adults, we have kept our kids in schools (kindergarten, primary, and secondary), we have distributed clothes and blankets, we have assisted HIV/AIDS people, and we have constructed several buildings for Kasupe Secondary School. The secondary school opened its classes in January 2008. All the above activities have been made possible because of your support and we thank you for your generosity. In particular, we would like to thank the following individuals, churches, and organizations for their financial, material, and field services to Kasupe Ministries:

KM strives to minister to the whole child. To do this, the following activities were carried out from January to December, 2008:

Blankets and clothes Distribution
· More than 350 children were given new blankets
· 330 blankets were donated by members of Ashland Presbyterian church while the rest were donated by other partners
· Assorted clothes were given to more than 700 children, donations came from different people

Food for Work Project
· 203 families are being supported with food, the project will run until March 2009
· The households represent about 2000 beneficiaries of the project


Proposed Water Project
· Kasupe Ministries wrote a proposal for a borehole (deep well water pump) for Kasupe Secondary School
· The proposal was sent to an organization in Europe that showed interest in the project, and we are waiting for a response